Heat of Compression(HOC) dryers was implemented to save energy! Central management of operating information was also made possible through central monitoring!

Energy saving by about 300,000 kwh per year was achieved by implementing inverter type units and Heat of Compression(HOC) dryers, based on analysis of actual operational data. Furthermore, the customer’s corporate internal network was also linked to facilitate a centralized monitoring of operating status.

Inverter type units and Heat of Compression(HOC) dryers were implemented and operational data is centrally monitored through a group controller.

1. Implementation of inverter type units and a group controller 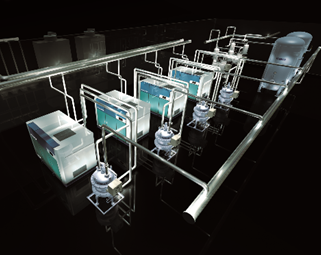 Since a difference between peak and non-peak loads was found as a result of measuring facility load status over a one week period, inverter type compressors that are expected to offer optimum energy savings were selected.

The unloaded operating time of units increased when the operating load of the plant was lower, creating loss of energy. Consequently, in order to automatically stop operation of unnecessary equipment to minimize unloaded standby time, a group control system was implemented.

2. Implementation of Heat of Compression(HOC) dryers

Heat of Compression(HOC) dryers were adopted as sustaining quality of air is extremely important since the air comes into contact with products indirectly, and as they can sustain the required dew point between -20°CADP and -40°CADP, while the electric power consumption is between about 15W to 25W, which is extremely low.
* Dew points can be achieved in a stable manner in the event heatless dryers or externally heated desiccant dryers are implemented, however this results in a energy loss of about 5 to 17%.

It became possible to gain information about compressor operation status at all times, making it possible to initiate responsive actions rapidly, in an event an unexpected alarm is triggered.